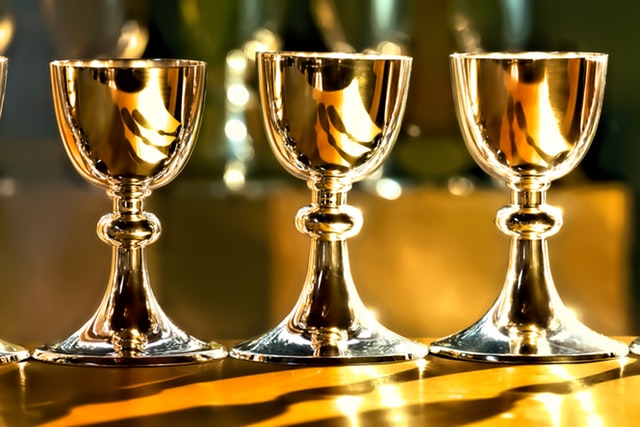 Large numbers of dioceses in the United States are banning communion from the cup for the faithful at Mass. While the reason given for the ban is to prevent the spread of the coronavirus, it seems to me that there are deeper, perhaps subconscious, motivations for the ban.

When we restrict access to the communion cup to the clergy alone, we are giving up the model of church as the People of God, which was established by the Second Vatican Council. We are affirming a previous model of church in which the laity were not seen as essential to the offering of the sacrifice of the Mass nor the accomplishment of the mission of the church.

Historically, for the first five centuries of Christian worship, communion under the forms of both bread and wine was normative and essential. Then over the 6th through the 13th centuries, participation of the laity in communion dropped dramatically. And while it has always been possible for the laity to participate in communion by receiving under the form of bread, the church eventually legislated that the faithful may never share in the communion cup.

A fundamental reason for the decline in the communion of the faithful, especially through sharing in the communion cup, was a growing cultural distinction between the sacred and profane worlds. The clergy came to be more and more associated with the sacred, and the laity with the profane.

Similarly, the Eucharistic elements came to be associated more and more exclusively with the realm of the sacred—that is, the realm of the clergy and not the profane world of the laity. In Rome, which tended to be more conservative than the rest of the church, communion from the cup remained as an option for the laity until the 13th century. But by the end of the 13th century, even in Rome, the laity were formally prohibited by law from sharing in the communion cup.

And that was the practice of the church until the Second Vatican Council in the mid-20th century.

The Second Vatican Council called for a radical reform in the way we worship. As part of the reform, the laity were once again encouraged to receive communion under both forms. The reason behind that change is important to grasp.

Up until the Council, our image of church was a pyramid. The pope was at the top, then the bishops, then the priests, then the religious sisters and brothers, and then the laity. The pyramid implied holiness, authority, mission, and governance. Those at the top were more holy, and had more authority. They were solely responsible for the mission of the church, and they were the rulers of the church. Those at the bottom were less holy, had no authority, and supported the mission of the church by supporting the clergy.

The Second Vatican Council rejected the pyramid model and instead described the church as the People of God. This shift is most clearly designated in the Constitution on the Church, Chapter II.

Chapter III—coming after the People of God—discusses the hierarchy. That chapter more often describes the bishops as shepherds and pastors instead of authoritarian rulers. The ultimate purpose of the hierarchy is “the nurturing and constant growth of the People of God” (18) so that they may be fruitful in their “obligation of spreading the faith [which] is imposed on every disciple of Christ” (17).

Eucharist as the model

The primary way the hierarchy nourishes the People of God and instructs them about the mission of the church is through the Eucharist.

In the pyramid model, the sacrificial offering of the Mass is the job of the hierarchical priesthood who act in persona Christi—in the person of Christ—when presiding at liturgy. In the People of God model, the clergy still act in persona Christi. But the sacramental identification with the priesthood of Christ in the Mass is no longer exclusively reserved to the clergy:

Though they differ from one another in essence and not only in degree, the common priesthood of the faithful and the ministerial or hierarchical priesthood are nonetheless interrelated: each of them in its own special way is a participation in the one priesthood of Christ. The ministerial priest, by the sacred power he enjoys, teaches and rules the priestly people; acting in the person of Christ, he makes present the Eucharistic sacrifice, and offers it to God in the name of all the people. But the faithful, in virtue of their royal priesthood, join in the offering of the Eucharist. They likewise exercise that priesthood in receiving the sacraments, in prayer and thanksgiving, in the witness of a holy life, and by self-denial and active charity. (Constitution on the Church, 10)

It matters because of what the Second Vatican Council is teaching about the nature of the church.

If the church is a pyramid, then the mission of the church rests primarily with those at the top. As both a model and nourishment for the mission, the priests must offer the sacrifice of the Mass and share in its fruits—communion. In this way, they learn and model that mission is about sacrifice for the sake of nourishing the world with Christ. The role of those at the bottom of the pyramid is to assist the clergy in fulfilling the mission of the church. They are not seen as co-offerers of the sacrifice, and sharing in the fruits of the Mass—communion—is solely a personal spiritual benefit. It is not essential to the mission.

People of God model of Eucharist

If on the other hand the church is a People of God, the mission of the church is the responsibility of all the baptized. The entire priesthood—both hierarchical and baptismal—offers the sacrifice of the Mass. “each of them in its own special way.” All who offer the sacrifice must share in the fruits of the Mass—communion—in order to learn and model that the mission is about sacrifice for the sake of nourishing the world with Christ.

If this is the model, then every Eucharist must include the sharing of the communion cup with the entire priesthood. The present-day teaching on communion from the cup is found in the General Instruction of the Roman Missal:

Holy Communion has a fuller form as a sign when it takes place under both kinds. For in this form the sign of the Eucharistic banquet is more clearly evident and clearer expression is given to the divine will by which the new and eternal Covenant is ratified in the Blood of the Lord, as also the connection between the Eucharistic banquet and the eschatological banquet in the Kingdom of the Father. (281)

The General Instruction further states that “at the same time the faithful should be instructed to participate more readily in this sacred rite, by which the sign of the Eucharistic banquet is made more fully evident” (282)

Why would we ever want to celebrate a Mass that was lacking as a sign and in which the Eucharistic banquet was less clearly evident? Why would we ever ask the faithful to forgo the communion cup at Mass? Click To Tweet

Given this very clear teaching of the church, why would we ever want to celebrate a Mass that was lacking as a sign and in which the Eucharistic banquet was less clearly evident? Why would we ever ask the faithful to forgo the communion cup at Mass?

Any celebration of Eucharist in which the communion cup is withheld from the laity is a regression to the pyramid model. We are saying that sharing the cup with the laity really isn’t really necessary—and perhaps the laity in general are not absolutely essential to the priestly mission of the church.

What we are giving up

The health concerns around a virus outbreak are real. We should all take prudent measures to minimize risk. In the celebration of the liturgy, however, the greatest risk is just showing up. According to the Center for Disease Control, the virus is spread by being in the same room with infected people who cough and sneeze (https://www.cdc.gov/coronavirus/2019-ncov/about/transmission.html).

If some study does appear that demonstrates sharing in the common communion cup is a significantly greater hazard than merely being in the same room with infected people, we should expect the ban to be applied equally to the hierarchical and the baptismal priesthood where large numbers of both are gathered—at the Chrism Mass for example.

Unless we change our mindset, we are affirming a pyramid model of church in which the laity are not seen as co-offerers of the sacrifice of the Mass and are merely regarded as “collaborators” of the clergy. Click To Tweet

When we ask the baptized priesthood to give up the communion cup, we are giving up a model of church that identifies the faithful as coresponsible for the mission of the church. Pope Benedict XVI said we must have a change of mindset about this:

Co-responsibility demands a change in mindset especially concerning the role of lay people in the Church. They should not be regarded as “collaborators” of the clergy, but rather as people who are really “co-responsible” for the Church’s being and acting. (“Message on the Occasion of the Sixth Ordinary Assembly of the International Forum of Catholic Action” [10 August 2012])

Unless we change our mindset, especially about our communion practice, we are affirming a pyramid model of church in which the laity are not seen as co-offerers of the sacrifice of the Mass and are merely regarded as “collaborators” of the clergy.

We are not just giving up the cup. We are giving up our belief in the church as a People of God.